As mentioned above this is a remake of the version before. I have deleted that one as I choose what you get to see and I have decided it to be my final on this matter only. The reasoning behind the edit is that I found the former ones (“Ruin” & “Birth”) too unsharp and the model in “Ruin” was not centered enough. Still isn’t perfectly in the middle; that photo didn’t seem to like that and lived its own life for a bit which really suited the thoughts behind it (yes, I can do the blabla-bullshit too). 🙂

When I was in high school we visited the “Haags GemeenteMuseum” where a lot of Piet Mondriaan’s (1872-1944) work is on display. One that particularly attracted me was his painting “Evolution” made in 1911. The painting contains a lot of theosophical influences and symbolism, the latter always fascinated me in art. With this painting Mondriaan hoped that people looking at it would convert to being more spiritual and less influenced by material and earthly ways. 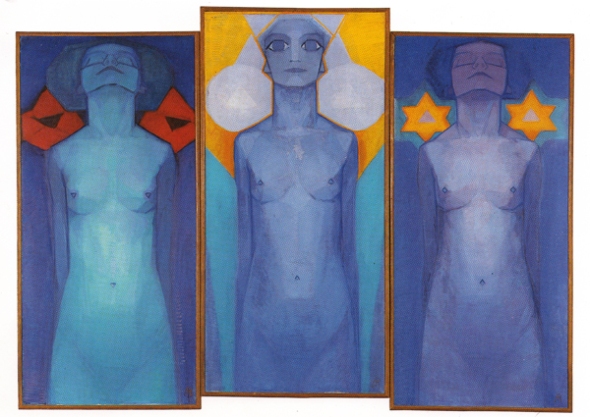 “A cosmic, mystical evolution progressing from matter through soul to spirit, influenced by Rudolf Steiner’s Theosophy, a combination of mysticism and new science. Three nude female figures, or perhaps one figure seen from three different points of evolution: the terrestrial or earthly body on the left with the red shapes behind her(red signifying earthly passion) and the triangles indicating nipples and navel pointing downward to earth; the soul at center with the white light behind her and her eyes wide open (Steiner felt young girls (hence the why I used a male) had extra visionary powers due to their supreme feelings of devotion and he thought full enlightenment only came with eyes open) with her nipples and navel triangles pointing upwards to a higher plane; and finally the Divine Spirit on the right with yellow stars behind her whose nipples and navel triangles point both up and down in a perfect harmony of the spheres through a dynamic balancing of opposing forces. The spiritual and physical in unison.” (Source: CSULB)

Of course, as one can tell from my former posts, I don’t believe in human kind being able to act as a spiritual society as a whole. We become too polluted by money and power. It is my belief that one day this will cause the ruin of mankind as we know it. So, when Carlo (my former teacher at SASK) came by to ask me if I wanted to work on the theme “Seven Deadly Sins” I was more than compelled to do so. Only to make 7 photos, each of them depicting one of the sins, seemed quite boring and rather cliche to me. Also, the Catholic Church came up with these categories as those are the sins all bad human behavior can be narrowed down to. But Man made these, not God. I wish to convict mankind in its entirety for they created everything and thus should be held responsible. The painting of Mondriaan hopped back into my thoughts one day and I decided to remake them, my way. “Devolution” as I see no hope for humankind because they are so susceptible to these so called “Seven Sins”.

I’ll post the photos separately below with the explanation for the ones interested. If you wish to remain blissfully ignorant, please refrain from reading the last bit, if you can 😉

I’ve gotten around the way I would like to present them. They will be printed on 70 x 100 cm (inkjet, I don’t want the print itself add anything to the photo besides making it bigger) with a white border from around 10 cm’s on each side. The prints will be mounted on foam board to keep them from fluctuating in the frame and then framed in black aluminum frames without glass.

The order of the images has also changed. First I wanted to present them in the same manner Mondriaan did, the final image, the result by that I mean, in the middle. But “Narcist” fits better in the middle, not just qua meaning and thoughts behind it, but also qua look of the image. It just fits better there hence the choice.

Anyway, I am looking forward to some more reactions on this work! Have a great evening!