Some time ago I was invited by Fred Bosschaert & Lieven Nollet to give a wet plate collodion demo at SASK St. Niklaas. Yesterday came that day. I got up at 6:30 to leave for St. Niklaas at around 07:15. Unfortunately I forgot some stuff and had to drive back home to pick them up. Add to that the construction works at the E313 leading to me arriving a bit later than I had hoped for. When I got up to the classroom where I was giving the demo I saw everyone was already seated and waiting for me to start. And as chaotic as I can be I started. Luckily Bart came along for the demo and we worked together flawlessly as he took up the preparing of everything in the darkroom while I could find my way in talking and laying everything out on the table.

It was a fantastic demo with lots of engaged listeners. It’s so fantastic seeing the surprise and wonderment on peoples faces when showing them the camera with the ground glass, explaining the age of the lenses, its apertures, black glass vs. clear glass and of course the process where especially the fixing part jumps out and makes for wild reactions. It was such a great pleasure showing them and spreading the knowledge of gone-by days. One person was so kind to send my photos of that day which I could place on my blog. So, all images (so far) are the courtesy of Corien de Witte.

Unfortunately I don’t have any images of the photos made, I did two, but hope that someone will be willing to give me those so I can put them here as well (hint hint) 😉

Edit: I received a scan from the first plate I made that day from Lieven. Thank you Fred! Bit of weird the collodion pealed off as it was a tintype = clean plate to start with. Next plate was much cleaner. Maybe I was less nervous then 😉

Edit: I also received a photo where the second plate is on also from Corien de Wiite (thank you again!)

For some reason yet unknown to me the photo decides to upload itself in magenta…I’ll have look at it later, for now I find it kind of funky (though not representing the original). 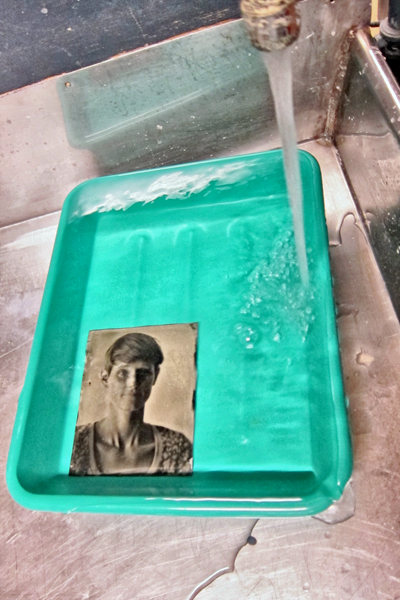 Anyway, I would love to this again as everyone seemed to have had a wonderful time, including me!