So , here they are at last! In short; it was a fantastic weekend. In long; please read on 😉

Friday we set everything up. I was able to use pretty much all the space I wanted which was great. No room for hanging the work which was great too; saved a lot of work and hassle. We laid everything out on tables and saved one table in the middle to display the camera, a book with guiding information, prices and a guest book. At first we covered the tables with a green cloth which later that day got removed by Franz Rothenburg, one of the organizers, as you can see on first photos. Luckily he decided to remove them and spread the layout a little although I was a bit afraid when he mentioned having done so the night before opening.

The boat was situated at the wharf of the Landbouwbelang which, unfortunately, wasn’t clear enough for everybody as some ended up missing the boat. Great location though, not many people know this place but it’s a beautiful spot in Maastricht. Calm but raw, showing the industrial part of Maastricht in its “gone-by” glory. 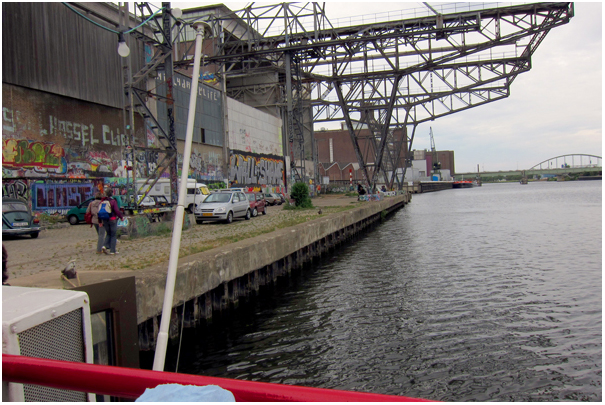 The weather proved to be an excellent companion this weekend. The sky remained blue and the sun hot and burning most of the time. Also good companions were on the boat as in the other artists. Katrien Haemers showed her paintings which were quite fascinating! The work of Astrid Verkoijen also appealed to me. Her colorful work used in her furniture looked really great.  Jimmy Dee played guitar on board and sang as well. He also performed on a didgeridoo which was cool!

He also gathered quite the bit of attention.

Another musical artist who performed on Sunday with Coen van Dam was Nico Zwackhalen with his bluesy voice. I met Coen before while there were still those famous jazz-monday-evenings at the Tramhalte in Maastricht. He rocked the piano there and I loved his playing from the start. Great to have met him on the boat listening to his music again. Downstairs at the boat “Viola di Gamba” gave a performance too.

Coretta Dekker treated us with a comical performance which was really funny. Unfortunately she found it to be not good enough so she canceled her performance for Sunday. Too bad; would have loved to see it again 🙂

Let’s not forget the wonderful poet of the house “Krokus” with his sharp words. A true addition to the boat with a remarkable feel for expression.

Youri Penders showed us the wonderful process of the printing press late 1800’s. Really cool as my camera is from somewhere around that very same time! He explained the process with quite the bit of passion and engagement which made it all the more fun.

Of course, let us not forget about the people who made this all worthwhile: the guests!

Also, let us thank the weather for being so incredibly kind!!

Of course, a special thanks goes to the Basta family, Suzanne Stohr and Resi Claessens, the owner of this boat (which is available for rent).

As you can see a totally different KunstTour than last year and that made it all the more fun! Hope to see you (again) next year.