Last Sunday we had our 3-monthly gathering of Picto Benelux and this time it was time for the wet plate collodion ambrotype process. Jeroen de Wijs and I prepared for a demo and Sunday morning Jeroen arrived at my place so we could drive together to Rixensart Belgium.

We decided to take my gear with us to do the demo and Jeroen prepared his “speech”, brought some lenses and examples of old original ambrotypes and ferrotypes. Bart wanted to drive so when Jeroen arrived we started packing everything into our car. Time to leave…NOT. The car refused to start (while it did half an hour ago..). So, loaded everything out of the car in to Jeroen’s car, not enough place for Bart so we left him behind, and finally took off to what turned out to be my worst demo ever 🙂

All photos are the courtesy of Stefan de Pauw.

Once arrived I started setting up the darkroom tent with help of others, filled up the silver tank etc. etc. The theoretical part went well but took quite a bit of time since everything had to be translated to French (Belgium). Not that that was a problem but the light diminished quite rapidly and by the time we were ready for the practical part of the demo it turned out to be quite a challenge.

The darkroom tent was inside with the temperature around 24 degrees (thanks Jacques, really 😉 ). I blew the dust of the plate, poured collodion on and placed it in the silver tank. So far so good. We anticipated to making the photo outside, it was pretty decent weather so that would work great. Once outside it was pretty damn cold, around 6 degrees. Positioned the attendees and got ready for the photo….guesstimated the exposure time around 15 seconds f4.

Went inside, got into the darkroom, pulled the plate out and developed…oops, that did not look very good…developed plate showing stains but no image… Oh well, let’s put it in the fixer bath. Black…and ow..I didn’t place the plate correctly on the holder so it fell into the tank.. Luckily Kal was handy enough to get it out for me (thanks), broke the plate (thought that was supposed to bring luck but I guess I should’ve shattered it into a million pieces) and I set up for a new one. 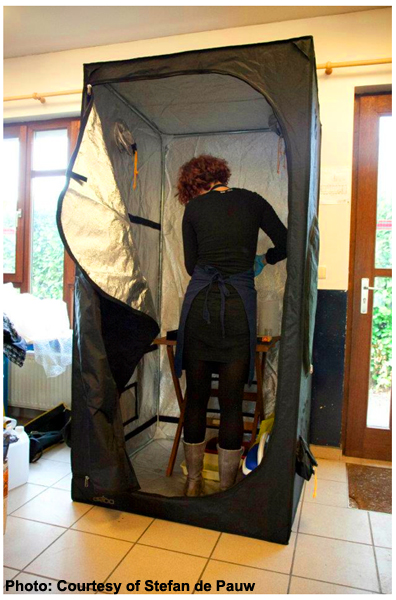 When we got outside the light was even less (of course) so we finally decided on an exposure time of 2 minutes. Not as many people gathered for the photo this time 😉

Two minutes were pretty long in the cold so everybody was glad to be able to go inside again, looking forward to seeing the result of trembling for two whole minutes.  I got back into the darkroom, developed the plate and…not much on the plate again besides some very obvious peeling. Darn…got outside, placed it in the fixer (good this time) and wow, some faces turned up from the dark. But for the most part it remained just dark. 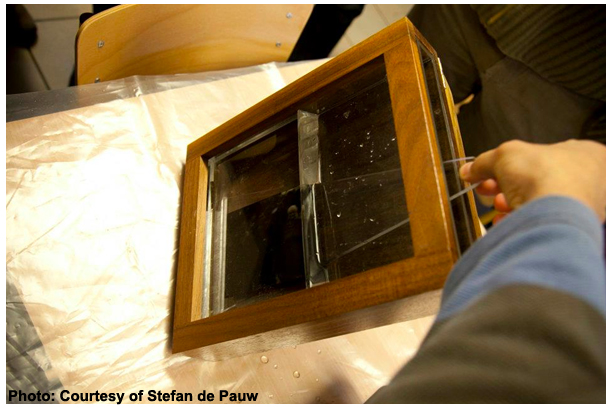 The show must go on so I dried the plate and prepared to varnish. Heated the plate, heated the varnish, poured it on the plate and… gone it was. This only happened to me once with the plate Quinn made from me. I blamed it on the difference in alcohol being used back then but this was all my chemistry, working fine just 2 weeks ago. And now it decided to eat up my plate. Oh well, showed everyone just how cumbersome this process can be, including me 😉 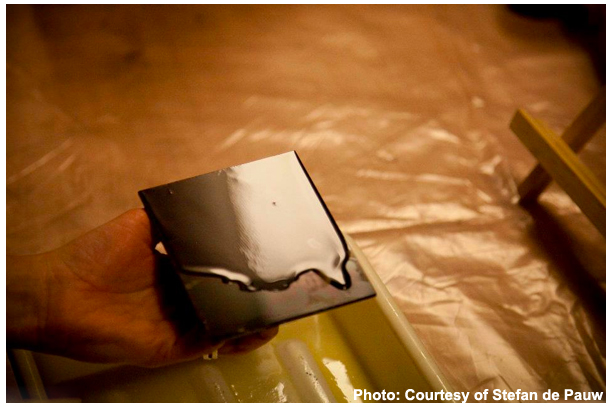 So..that was the end of that. I blame the peeling on the huge difference in temperature, about 18 degrees, the low UV light outside combined with the older collodion resulting in a lower-sensitivity which does not help in this case and resulted in too dark images. As far as the varnish is concerned..not sure. Will have to check it later to make sure it works again.

Last but not least: the self-made darkroom box by Rene Smet. Really pretty although it seems a bit tight for as a working space so have to keep the plates small I suppose but pretty nonetheless!